Join us for the 2020 Flag Day Parade. We will unite to honor our men and women serving in the armed forces and our veterans. Celebrating our men and women is an opportunity to work together, we unite to become a stronger community - we become "One Framingham".

To create an inclusive environment for the 2020 Flag Day Parade, the City has designated a Sensory-Friendly Area for the first block of the parade. This means the entertainment will be altered to accommodate children and families with autism and other sensory disorders.

In the first block between Clinton Street in front of St. Stephen’s Church and Memorial Plaza (in front of the Memorial Building), parade participants will refrain from using flashing lights and sounding sirens, horns, and loud music. This section has been designated in blue below.

Sponsored by The Explorers Program of Framingham Public Schools, the Sensory-Friendly Area will provide table activities for kids along the side of the Memorial Building on Concord Street, as well as the distribution of fidget toys which can help kids focus, self-regulate, and provide a calming influence. With support from The Autism Alliance, children will also be offered headphones and sunglasses to use during the parade. Therapro of Framingham has also generously donated a variety of toys for children to have.

The parade will progress normally beginning at the Memorial Building which means that all sounds and lights will begin once the parade participants go around the corner to Union Ave. 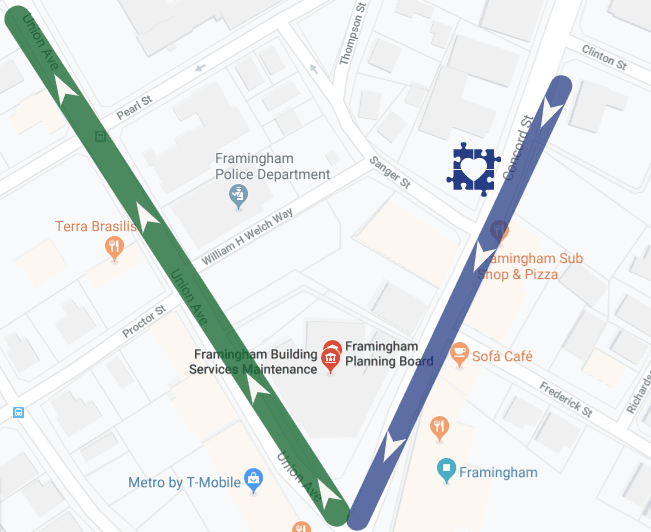 “The Flag Day Parade is a symbol of appreciation to those that are serving our country, our veterans and their families. Because we all know freedom is not free, we gather to honor those who help pay for that freedom” said Mayor Yvonne M. Spicer.

To make this a successful event, we need your help. If you are willing to volunteer or make a contribution, it would be greatly appreciated:

The Parade will start at St Stephen’s Church and end at Bowditch Field.

Flag Day commemorates the adoption of the flag of the United States, which happened on June 14, 1777 by resolution of the Second Continental Congress. Flag Day was officially established by President Woodrow Wilson on May 30, 1916.

“I therefore suggest and request that throughout the nation and if possible in every community the fourteenth day of June be observed as Flag Day with special patriotic exercises,” said President Woodrow Wilson.

“We celebrate Flag Day this year with a fresh sense of our strength as a nation. Solemnly, we accept the responsibilities placed upon us by our power.

We honor the men and women in the armed services and in the factories and homes who, with God’s help, have given us our victories. We face the battle ahead with solemn gratitude for the triumphs of the past.

Our Flag has accompanied our fighting men on a hundred battlefields. It flies beyond the seas over the friendly lands our arms have freed, and over the hostile countries our arms have conquered. Our Flag will be planted in the heart of the empire of our last remaining enemy.

As we press forward to final victory, we are strengthened with the knowledge that for millions of people in other lands as well as in our own our Flag is a living token of human integrity and freedom.

Let us observe this Flag Day by raising our Flag and beside it the flags of the United Nations. It is especially fitting that we thus honor our Allies at a time when we are working with them to lay a firm foundation for world peace. Let this display of the flags of the United Nations symbolize our unity with our Allies both upon the battlefields of war and under the skies of peace. Let us again dedicate ourselves and our Republic, under God, to the united cause of peace and justice and the brotherhood of all men everywhere…”