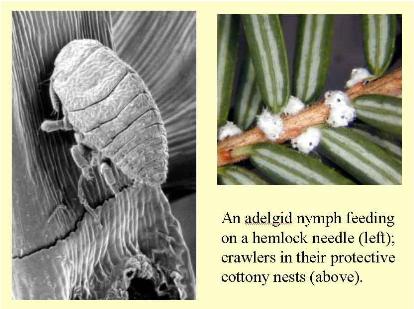 This insect can be recognized by the presence of a dry, white woolly substance on the young twigs of hemlock. This "wool" can generally be found year round, but it is most abundant and conspicuous in the spring when egg masses are present. The wool covers the insect in all but its earliest life stages. As they feed their woolly covering expands-the “wool” is a waxy material that comes out of pores on the insect’s body. It resembles the tip of a cotton swab, but is up to1/8th inch diameter on average when the insect is mature.

Injury occurs as a result of the insects sucking sap and probably injecting toxic saliva while feeding. Damage from accumulated injuries causes the needles on infested branches to dry, turn a grayish-green color, and then drop from the tree. Buds are also killed, so little new growth is produced on infested branches. Dieback of major limbs progresses from the bottom of the tree upwards, even though the infestation may be found throughout the tree. Trees weakened by HWA often succumb to diseases and wood-boring insects and are readily broken and thrown by wind.

Hemlock woolly adelgid in our region completes two overlapping generations a year. A general timeline follows. During March and April, adults of the overwintering generation each lay up to 300 eggs within their woolly covering. Crawlers hatch from April through May, and then settle on the twigs near the bases of the needles where they insert their piercing and sucking mouthparts. There they feed throughout their development. This spring generation matures by the middle of June, and deposit an average of 75 eggs each. The crawlers hatch in early July and settle on the new growth. They are generally settled and dormant by the beginning of August. In mid-October feeding resumes and the characteristic woolly covering begins to develop. Nymphs feed during the winter and mature by spring.

Even though it spends most of its life firmly attached to hemlock twigs HWA has been spreading relatively rapidly in North America. Eggs and crawlers, the only stages that are unattached, are present from March through July when they are readily dispersed by wind, birds, deer and other mammals, including people. Moving infested plants any time of the year can result in spread of this pest.