EMERGENCY ALERT Access to City Hall is Limited Read On... 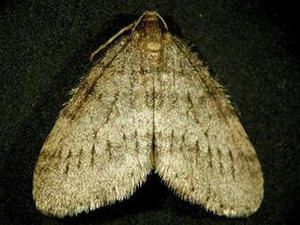 havoc on our trees. Introduced into the United States from Europe via Canada, is most commonly observed in late fall, early winter as a whitish adult moth and in spring as a tiny green caterpillar.

The adult winter moths emerge from the ground in November or December, but only the male is able to fly. The female climbs to the base of a tree or building and attracts the male through the pheromone (sex scent) that she exudes.

After mating the female lays a cluster of approximately 150 eggs under tree bark or in tree crevices, and her life is now over.

In March or April the eggs hatch into a smooth green inchworm with a narrow white-stripe running lengthwise on each side of the body. The caterpillar spins a strand of silk, which, with the help of air currents, takes it into tree canopies in a dispersal method known as "ballooning.”

The most visible effect of the winter moth infestation is defoliation of trees and shrubs in spring. In Massachusetts, winter moths affect maple, oak, and ash as well as fruit producers such as apple, crabapple, and blueberry. Newly-hatched caterpillars burrow into the buds of trees and shrubs before they open, and begin to feed; when they finish with one bud they move to another.

The most heavily infested trees may be completely defoliated, and while healthy trees are capable of putting out a second set of leaves, the process puts severe stress on the tree. Research has shown that complete defoliation can reduce the annual growth rate of some oak species by as much as 47%, and successive defoliations can kill branches or entire trees.

The impact of the caterpillars may also be exacerbated by secondary effects such as prolonged, cool springs, which allow the caterpillars to feed longer in the buds; dry years which put trees under additional stress; and infestations of other insects such as bark beetles, fungal parasites, or other moth species.

In 2005 and 2006, in a cooperative effort by the Department of Entomology at the University of Massachusetts and the Forest Health Program at the Massachusetts Department of Conservation and Recreation, hundreds of parasitic flies known as Cyzenis albicans were released at Wompatuck State Park in Hingham and on town-owned property in Wenham, MA. In 2011, the university shared an update on the project. Cyzenis albicans has been effective in combating winter moth populations in Nova Scotia, as well as other parts of Canada.

Homeowners concerned about damage to trees and shrubs should check susceptible plants for the little green “inchworm” caterpillars in early to mid-April. If a serious infestation is apparent, there are a few steps that can be taken to minimize damage.

Supplemental watering. Providing extra water throughout the season will help trees recover from the stress of defoliation and re-foliation,

Tree banding. Paper or plastic strips covered with a sticky substance are commercially available to create a barrier that entraps the adult females and caterpillars. Though logical, this method has not proven to be effective for major infestations because:

Nevertheless, it may be worth a try for minor infestations on individual specimen trees.

Oil sprays Available at garden stores, these sprays are applied to tree trunks and branches to kill eggs before they hatch. This treatment also gives imperfect results, but has been recommended for fruit orchards, where flower bud damage can be devastating to crops.

B.t. kurtstaki (Bacillus thuringiensis kurtstaki) This bacterial pesticide has proven effective in killing young caterpillars of a number of pest species. Unfortunately, it can also kill many of our native butterflies and moths, the vast majority of which are either harmless or beneficial. For B.t. to be effective, it must be applied to the surface of the leaves once they have expanded for the caterpillars to ingest it, i.e. after much damage has already been done within the leaf buds. Also the mature caterpillars feeding on expanded leaves may be resistant to the bacillus.