The gypsy moth, native to Europe and Asia, is an invasive 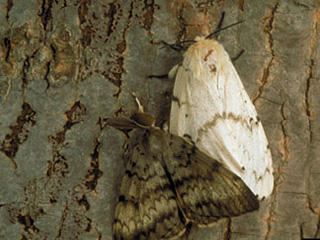 moth that defoliates hundreds of acres of forests from New England west to Michigan and south to Virginia, and also on the west coast from California to British Columbia. 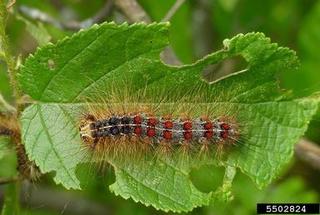 It was introduced to the United States in 1869 when French artist, astronomer, and amateur entomologist Leopold Trouvelot imported some eggs of this species to Medford, Massachusetts, with the idea of breeding a silk-spinning caterpillar that was more resistant to disease than the domesticated silkworm. Unfortunately, the caterpillars escaped into his backyard. About 10 years later, they began to appear in large swarms, and by the late 1880s they were causing severe defoliation in the area.

The gypsy moth caterpillar and the eastern tent caterpillar are often confused, but are readily distinguished by comparing the markings of the two species.

The gypsy moth caterpillar has five pairs of bluish warts followed by six rows of red warts running down the length of its back; the eastern tent caterpillar has no warts but a prominent yellowish-white center stripe above. (The latter also has intricate markings in blue, orange, and white and is actually quite beautiful). Tent caterpillars hatch early (about mid-April) and become conspicuous by May when they begin spinning the silken “tents” for shelter. Gypsy moth larvae, on the other hand, are just beginning to emerge by May and are tiny and inconspicuous at that time.

Like all insects, gypsy moths go through a series of distinct life stages: egg, caterpillar or larva (which changes in appearance as it grows), pupa, and adult moth.

Hatching in May from buff-colored egg masses deposited on tree trunks or in more sheltered places, the tiny (quarter-inch-long) caterpillars almost immediately climb upward toward sunlight and the leaves on which they will begin to feed.

Many of them then spin long silken threads on which they drop down from the foliage. The wind then helps disperse them to other trees, resulting in redistribution of the larvae. Once the caterpillars find a suitable tree (oak, birch, and apple trees are favorites), they begin eating the leaves, growing rapidly, and molting their skins to accommodate their increasing size.

After a few molts, the one-inch-long larvae avoid light by descending from their host tree just before daybreak and spending the day in dry, dark, sheltered spots under loose bark on trees, in leaf litter below trees, or on the undersides of objects such as picnic tables. At dusk they follow their silk thread and climb back up to the tree’s crown to feed. It is at this stage that people usually begin to notice the caterpillars and the defoliation of trees.

After passing through five or six larval stages, the caterpillars ultimately reach a length of 1.5-2.5.” In July they pupate in sheltered locations, such as the undersides of tree limbs and lawn furniture, or inside the wheel wells of parked automobiles. After about two weeks the adult moths emerge.

The flightless white-and-buff female moth gives off a chemical scent called a pheromone, which acts as an attractant to the smaller brown-colored males. After mating in July or August, each female deposits an egg mass of 75 to 1,000 eggs (mixed with yellowish hairs from her abdomen) on a tree trunk or other surface. The moths die after reproducing, but the egg masses survive the winter and renew the cycle in the spring.

Gypsy moths belong to the widespread family of tussock moths, some of which show cyclical population booms and crashes. During a boom, or outbreak, they can cause massive defoliation most likely in uniform stands of tree species, particularly oaks.

While a disheartening sight, the long-term effect of the phenomenon is not as disastrous as some commonly assume and may in some ways be beneficial. Thinning of forests by gypsy moths may produce a healthier, more diverse, and perhaps a more gypsy-moth resistant stand of trees.

Moderate defoliation benefits forest wildlife by stimulating understory growth of shrubs and berry-producing thickets. The larval droppings (frass) fertilize the soil, the larvae provide food for birds and mammals, and the skeletal remains of trees that succumb provide habitat for wildlife, thus promoting diversity in the forest ecosystem.

Yet, it might be comforting to know that there are some natural controls at work as well as some prevention techniques you can employ.

Some native birds, such as cuckoos, downy woodpeckers, gray catbirds, and common grackles, will eat gypsy moth caterpillars but, unfortunately, not in large enough quantities to have an effect during an outbreak.

White-footed mice, and occasionally gray squirrels, prey on gypsy moth larvae and pupae. In addition, there are a number of wasps and flies that parasitize the eggs, larvae, and pupae of the moth. There are also bacterial and mold parasites that attack this moth species.

Several insect and disease controls have also been introduced. The insect predators that were brought here to function as biological controls on gypsy moth populations prey exclusively on these moths or other closely related species.

One such insect control is a large, green, predacious beetle (Calosoma sycophanta). The adult of this beetle eats gypsy moth larvae, and the larval beetles seek out and feed on the moth pupae.

In the fall and winter, inspect your property, including woodpiles, stone walls, and lawn furniture for egg masses. To kill them, scrape the eggs into a container and douse them with boiling water, being careful to avoid skin contact. Do not merely scrape the eggs onto the ground. They can survive temperatures 20 to 30 degrees below zero Fahrenheit.

Egg masses deposited in the wheel wells of cars or among stacked woodpiles may account for much of the spread of gypsy moths from state to state. You can avoid carrying the moths to new areas by checking for, and removing, egg masses before leaving an infested area.

If spraying of pesticides is recommended, make sure the treatment uses B.t. kurtstaki (Bacillus thuringiensis kurtstaki), a bacterial pesticide that has proven effective in killing young caterpillars of a number of pest species. Unfortunately, it can also kill many of our native butterflies and moths, the vast majority of which are either harmless or beneficial. For B.t. to be effective, it must be applied to the surface of the leaves once they have expanded for the caterpillars to ingest it, i.e. after much damage has already been done within the leaf buds. Also, the mature caterpillars feeding on expanded leaves may be resistant to the bacillus.

What Not to Do

Do not use chemical pesticides. Despite extensive control programs using various insecticides - first DDT, now mainly carbaryl (Sevin) - the gypsy moth has steadily increased its range. Although these substances do kill the larvae and thereby protect the foliage in the year of application, the insects are never totally eliminated. Furthermore, insecticides also kill the insect predators and parasites of gypsy moths and interfere with other natural controls such as the virus that kills the caterpillars at high population densities. Applications of carbaryl or other pesticides may actually prolong or exacerbate outbreaks.

Gathering and destroying the caterpillars by hand is a waste of time and effort. You will lose because you will be greatly outnumbered by larvae.

Traps to catch and eliminate the gypsy moth chiefly benefit the seller. Traps are sometimes used by scientists to count numbers of larvae and predict outbreaks. Disparlure, a synthetic chemical that mimics the sex attractant of female gypsy moths, is used to lure male moths into traps. This will not control outbreaks, however, because there is no hope of trapping enough males to prevent females from mating.

For those who may be allergic to gypsy moth caterpillars, you should minimize contact with the insect by wearing long-sleeved shirts and by drying clothes indoors during an outbreak. Wear gloves and protect exposed skin from the egg masses while removing them.

Should you develop a rash, apply cold compresses and calamine lotion to the affected area. Hydrocortisone cream may also be used, but the rash usually goes away after two to three days without any treatment.