The Framingham Historic District Commission would like to establish the City’s sixth local historic district in the mill village of Saxonville. Framingham already has five local historic districts that protect 84 properties significant to the history and architecture of Framingham. More information about these districts can be found Historic District Commission page. 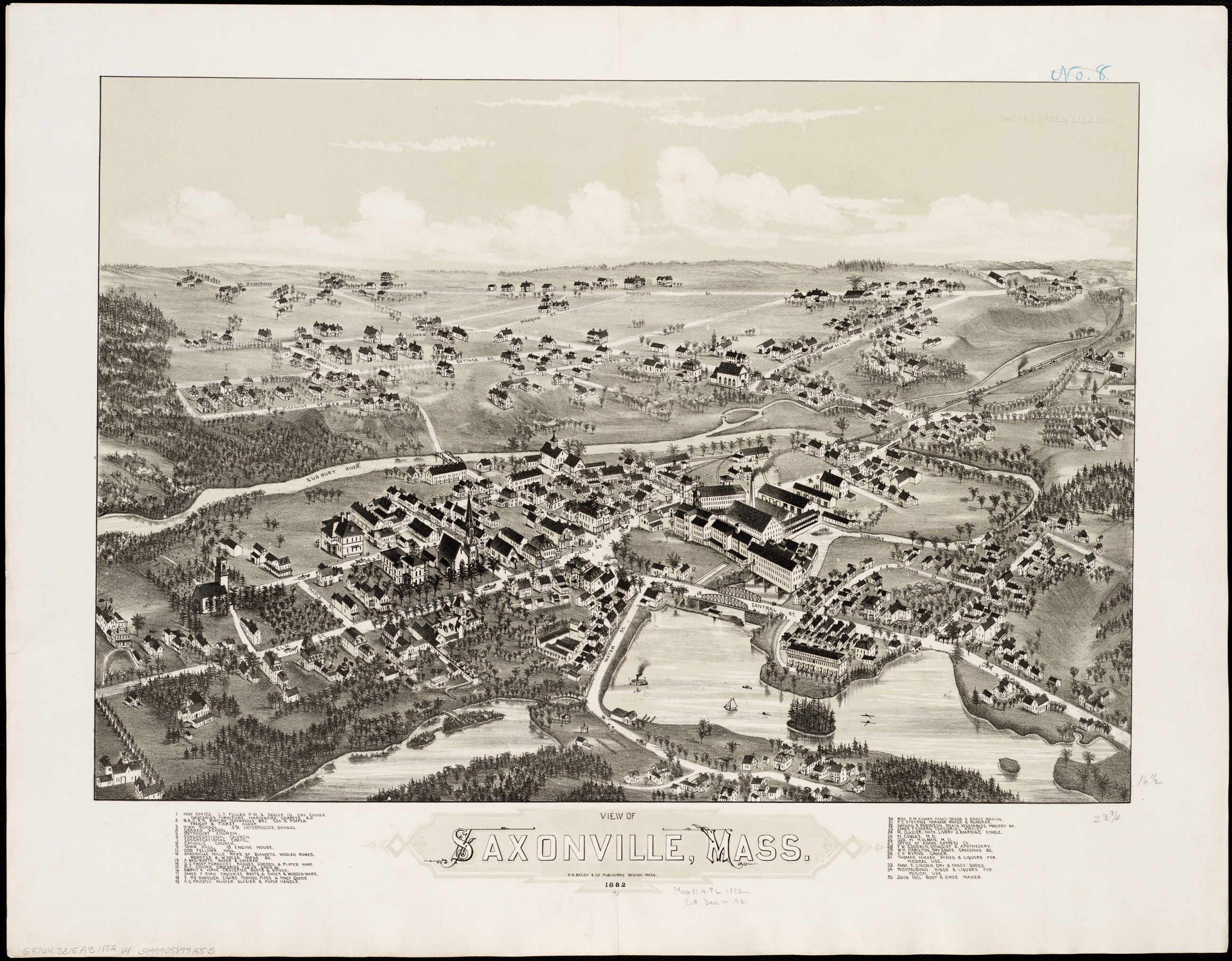 This bird’s eye view of Saxonville, drawn in 1882, shows the area at the height of its development, when the mill was very active.

The HDC has chosen to pursue Saxonville as our sixth local historic district as it was one of the earliest areas of settlement in Framingham, it retains a high number of historic buildings, and it also includes the Saxonville Mills complex, a major Framingham industry throughout the 19th and early 20th century and a significant landmark. The area includes a wide variety of worker housing such as small single-family houses, various duplex configurations, and a few larger buildings. Major institutional buildings include the Athenaeum, the Stapleton School, and Edwards Congregational Church. The area retains a high degree of integrity, with very limited 20th century construction.

What are the proposed boundaries?

The HDC has chosen to focus on the area immediately around McGrath square, north and west of the Sudbury River, and up Elm Street to the aqueduct. This area has a high concentration of historic buildings and also includes significant properties such as Saxonville Mills and the Pinefield Shopping Plaza. 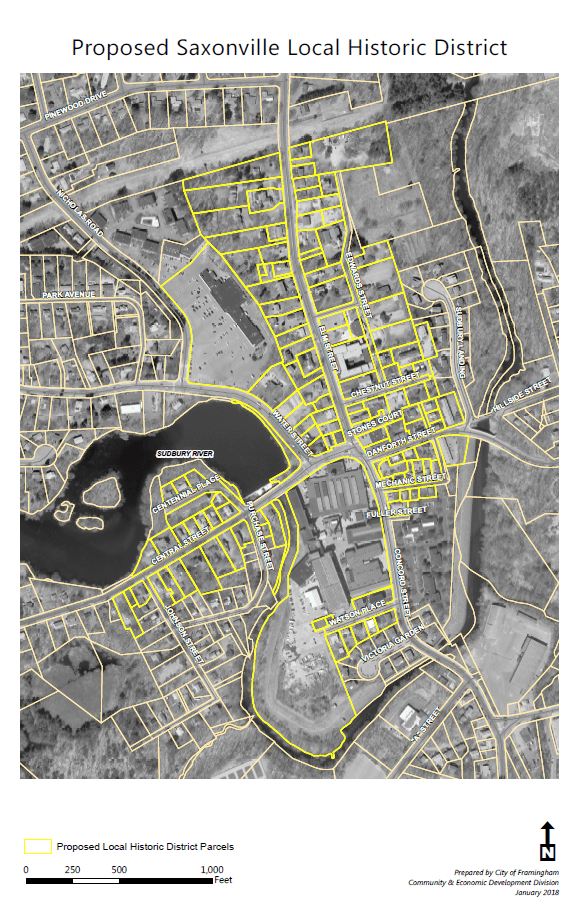 This is a map of the properties proposed for the Saxonville Historic District. The boundaries of this district are subject to change.

However, most things that a property owner does to their property do not require Federal or State permits, licensing, or funding. You do not need a state permit to put an addition on your house, or a federal license to demolish a building. A local historic district, however, provides these protections through local land use control and enforcement. In addition, the National Register district does not cover several properties that the HDC considers important to the village; while the proposed local historic district would roughly follow the bounds of the existing National Register district, it would also expand them in a few areas. 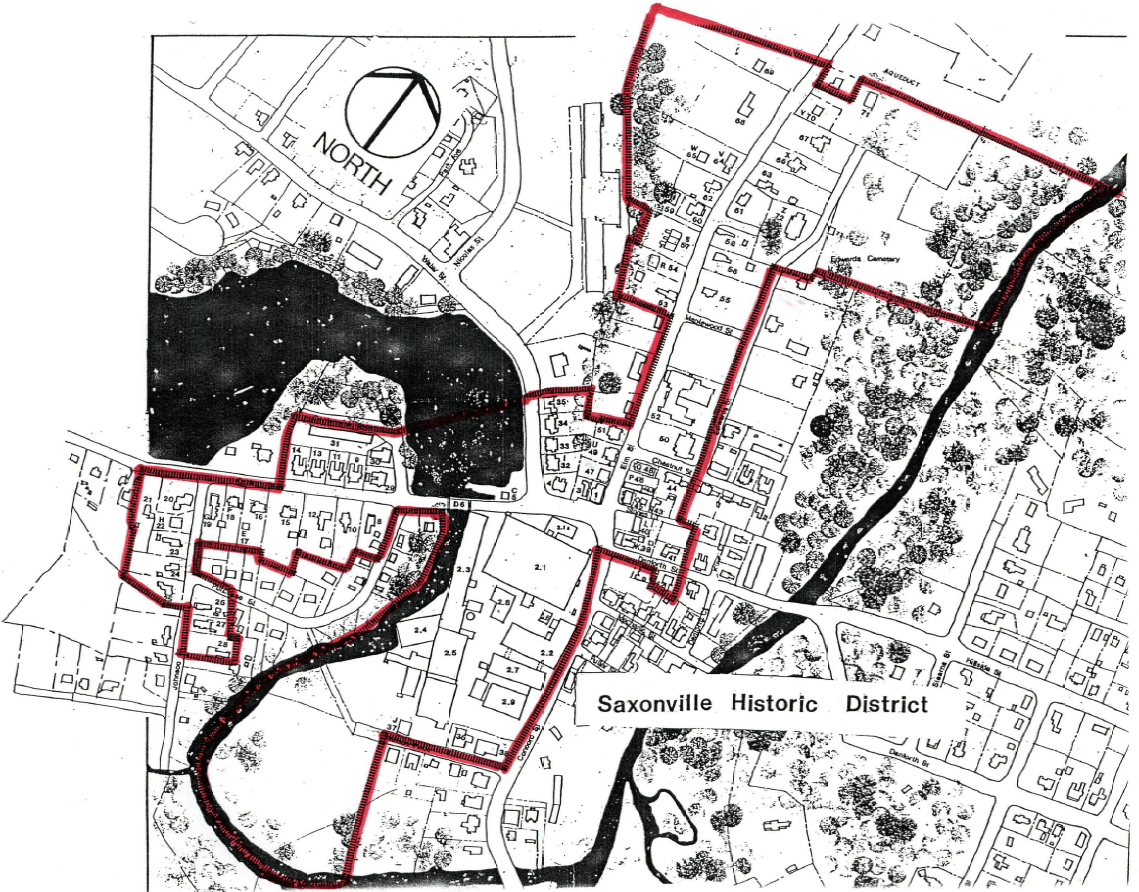 This map, included with the National Register of Historic Places nomination for Saxonville, shows the extent of that district’s boundaries. The proposed local historic district will have similar boundaries.

What are the steps for establishing a local historic district? Where is the HDC in the process?

The HDC has been working since early 2016 to prepare detailed documentation on all of the historic properties that might be included in the district. During 2016 and 2017 we hired a consultant to document a handful of properties in the area, and during 2017-2018 we received a grant from the Massachusetts Historical Commission (MHC) to document 80 properties. The project concluded on June 30, 2018.

The properties are documented on standardized forms that MHC provides following their strict statewide standards. These forms include basic information on a property, such as date of construction, historic name, historic use, and materials, but also include a written architectural description and a historical narrative. These forms describe the important architectural features of a building, outline any significant changes the property has undergone, and give a description of the property’s owners and occupants, and their relationship to the larger Saxonville and Framingham community.

This work does not involve interior research on any property; all photography and investigation is done from the public way. Primary and secondary sources such as deeds, maps, and city histories are used to develop the historical narrative.

As part of this process, the HDC will be holding several public meetings, notifying property owners, and generally soliciting comments on the project from the public. All property owners will always be notified of events, but if you live outside of the proposed district and would like to attend you are more than welcome to! Notice of all events will be posted on the City’s meeting website.

As the documentation work is wrapping up, HDC staff will prepare a Preliminary Study Report that meets state guidelines. This report will outline the history of the district, its significant architectural features, present boundaries for the district and their justification, and include the City’s existing local historic district bylaw, which will govern the district. This Preliminary Study Report will be submitted to the City’s Planning Board and the Massachusetts Historical Commission (MHC) for comment.

Some examples of recent study reports include the H.H. Richardson Depot (PDF) and the Pike-Haven-Foster House (PDF).

After the submission of the Preliminary Study Report to MHC, the HDC is required to wait sixty days before proceeding with the next step, a public hearing. While we anticipate holding public meetings throughout the process, this will be an official public hearing as required by MGL Chapter 40C. Notice must be mailed to all residents of the proposed district at least 14 days prior to the public hearing.

At the public hearing, the HDC will present the plans for the proposed district as outlined in the preliminary study report. We will present the boundaries for the district, our justification, and the bylaw (which will be the city’s current historic district bylaw. Any comments received from the public will be incorporated the Final Study Report.

Local historic districts require a 2/3 vote of a municipality’s legislative body; in Framingham’s case, our new City Council. After we hold the official public hearing, we will schedule an appearance before the City Council for their vote. We must present to them the Final Study Report, a map of the proposed district, and will direct them to the existing historic district bylaw.

If we receive the support of 2/3 of City Council, we will have Framingham’s sixth local historic district! The final step will be to record a list of the properties and a map of the district at the Registry of Deeds in Cambridge, so that future property owners are aware of the district.

What are the historic district regulations?

Under MGL Chapter 40C and the City’s Historic Districts bylaw, the HDC must review all changes to the exterior of a building or structure visible from the public way. The HDC does not review projects that are maintenance or ordinary repair. Let’s break down those four phrases:

In addition, under the City's bylaw the following are exempt from the HDC's review:

If the district is established, the HDC will adopt design guidelines specific to Saxonville that will clearly outline for property owners what is and is not allowed in the district.

The goal of a local historic district is not to prevent change but to allow for the thoughtful consideration of change in an area that Framingham’s residents believe is historically and architecturally significant.

Do I have to make my house look more historic or open it to the public?

Property owners do not have to make their house look more historic or open it to the public. In fact, they are not obligated to do anything, except get approval from the HDC before they begin any exterior work to structures or their property. If you are not planning to make any changes to your property, only undertaking maintenance, then you will not have any interaction with the HDC.

What does a local historic district mean for my property's value?

While a study of the impact of local historic district designation on property values has not be completed in Massachusetts, a study completed in 2011 in Connecticut found that properties in local historic districts generally had a higher property value compared to surrounding and similar buildings, and they also held their value longer during times of economic downturn, such as after 2008. You can read the study here.

Why is my property included in the district? It’s not historic!

The National Park Service defines historic buildings as anything built more than 50 years ago; as of 2018, that would be anything built before 1968. We have included several more recent (late 20th century) properties in the district because we want to protect the overall feel and character of Saxonville, not just individual properties. Protecting a 19th century building on one lot while allowing major changes to occur next door would ruin the setting of the historic building and the overall character of Saxonville.

Where can I find out more about historic districts?

The HDC has information, including the current districts and the City’s historic district bylaw on our Historic District Commission page.

If you have specific questions about the district or your property, please feel free to contact Jennifer B. Doherty, Historic Preservation Planner, at 508-532-5455 or by email.